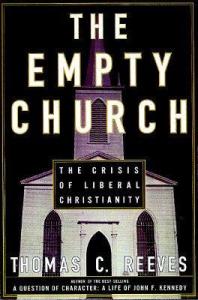 This book and Via Media make the same point: “New numbers reveal that the collapse of the Episcopal Church dramatically accelerated in the last ten years.
“The denomination is literally falling apart, with attendance down 25% between 2000 and 2010. . . . The numerical decline, bad as it is, matters less than the collapse in the moral authority of the church. The Episcopal Church has made many controversial pronouncements on social issues and national security policty; at the latest General Convention the church declared that transgendered persons cannot automatically be barred from the priesthood.
“One can agree or disagree with some of these individual decisions, but what is striking over time is the decline in the moral weight of the church. It use to matter what the Episcopal Church thought of this or that social issue. Other mainline Protestant churches and many social and political leaders followed its theological and political debates.
“Now, basically, no one outside the dwindling flock in the pews really cares what The Episcopal Church says about anything at all. The General Convention can pass a million resolutions, and nothing anywhere will change.
“No one is even really angry anymore at anything the Episcopal hierarchy does; at most, there is a sigh and a quiet rolling of the eyes. Soon, there will not even be that.
“It’s an extraordinary decline in an institution that a generation ago was still one of the pillars of American life. At this point the disaster appears irretrievable; those running the church are determined to run it into the ground and it is hard to see how that can change.
For Anglicans, the theological and demographic collapse of their church is a bitter blow.”

Rep. Andre Carson (D-IN) received national attention last year by claiming the Tea Party goal was “to see blacks hanging from a tree.” He was back in the news when he addressed the Islamic Circle of North America convention.
The Congressman said madrassa schools (Islamic parochial schools), should be a model for how American children are taught.
The schools receive government funding in the UK, but reports have demonstrated students are beaten and taught intolerance of all things non-Islamic.
The National Commission on Terrorist Attacks Upon the United States (the “9/11 Commission”), says the schools in Pakistan were fostering anti-American and terrorist sympathies.
The Congressman later said he was not promoting the Koran or his religion, but that is not what the video demonstrates.
Rep. Carson said the Koran should be the “foundation” for American schools: “America will never tap into educational innovation and ingenuity without looking at the model that we have in our madrassas, in our schools, where innovation is encouraged, where the foundation is the Koran.”
The lawmaker said “I say to those who are here under cover … Allah will not allow you to stop us. . . There are only two Muslims in Congress and we want more; and we have to have more. . .
We have to registered to vote.
“We must begin to groom the mayor of Hartford Connecticut. We have to groom the next city councilor, the next governor, the future President; the first Muslim President. . . It’s time for us to create the next generation of leaders.”
After a firestorm of negative publicity, the Congressman was asked if he believes American public school curriculum should be based on the Koran. He has apparently changed his viewpoint because today Carson is saying, “No, no no.”

This is Jimmy Hall of Douglasville, Georgia who today said I am going to hell. Jimmy believes “The Tea Party needs to ‘weed out’ non-Christians, pro-choicers and gays. Otherwise, you are just as bad as Democrats. If someone IS NOT Christian, they are NOT very Conservative. The whole point of being Conservative is to support Biblical Principles. . . YOU are NOT a Christian, Greg, You are 100% wrong, Biblically. Obviously, God and the Bible mean nothing to you. You deserve eternal damnation. Read the Bible, if you can even read.” END_OF_DOCUMENT_TOKEN_TO_BE_REPLACED

My parents have passed away but at Christmas I am reminded of our family traditions. When I was young my mother read “A Christmas Carol” by Charles Dickens. Her message was neither unique nor especially profound. She felt it was important for a small child to understand why Ebenezer Scrooge was so unhappy. He had every…thing as far as material wealth was concerned, but had been miserable for decades. END_OF_DOCUMENT_TOKEN_TO_BE_REPLACED

A new poll shows a majority Americans are in the dark about President Obama’s religion. Only one person in three knows Obama is a Christian, while nearly one in five think he’s a Muslim. His advisers should tell the President to attend church more often. He has attended St John’s Episcopal Church across Lafayette Square from the White three times, and there is a chapel at Camp David. His staff should alert the press when he is headed to church.
The President always describes himself as a Christian and says he prays every day. During the 2008 campaign the President said he had been attending the same Christian church for almost 20 years, and he was sworn into office using the family Bible. During his Senate campaign he said: END_OF_DOCUMENT_TOKEN_TO_BE_REPLACED

The First Amendment to the U.S. Constitution says government shall make no establishment of religion. The actual words prohibit the making of any law “respecting an establishment of religion, or prohibiting the free exercise thereof.” That is not an ambiguous phrase. They did not want a state sponsored religion similar to Great Britain. Some of them fled Britain to avoid the Church of England. END_OF_DOCUMENT_TOKEN_TO_BE_REPLACED

Because of its first in the nation presidential precinct caucuses, Iowa is often at the center stage of American politics. Statewide candidates are frequently linked to presidential contenders, and this year will be no different. A crucial battle is now being waged between social conservatives and regular Republicans, and it will culminate in the June 8th gubernatorial primary. END_OF_DOCUMENT_TOKEN_TO_BE_REPLACED