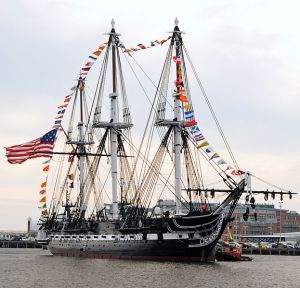 This is the busiest day of the year for the USS Constitution. It was authorized in 1794 as one of the original six Navy frigates, and was expected to have a service life of ten to fifteen years. It is still in commission today.
The frigate has 44 guns and was granted its name by President George Washington. Its 1797 launching ceremony was attended by President John Adams.
America’s founders were not isolationists and President Thomas Jefferson dispatched the ship to battle the Barbary pirates (the terrorists of that era) in Tripoli Harbor. President James Madison sent the ship back into battle during the War of 1812.
The British burned the White House and the U.S. Capitol, but the Constitution helped turned the tide. It earned the nickname “Old Ironsides” when it defeated five British ships. It had 13 cannonballs implanted in its hull, but none made it through.
The Constitution’s victory prompted the British Admiralty to order its frigates not to engage the heavier American ships one-on-one. There was a tremendous celebration when the triumphant Constitution returned to Boston where it was built and remains today.
For the United States Bicentennial celebration in 1976, the Constitution led the parade of tall ships in Boston Harbor, firing her guns at one-minute intervals for the first time in a century. She rendered a 21-gun salute to the Royal Yacht Britannia as Queen Elizabeth and Prince Philip arrived for a state visit. Her Majesty and His Royal Highness were then piped aboard.
The ship is open to the public and is berthed at Pier 1 of the former Charlestown Navy Yard, at the end of Boston’s Freedom Trail. 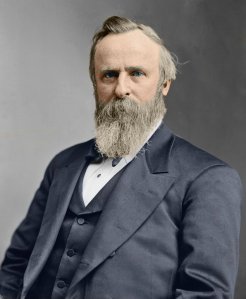 ANSWER: It has happened three times. The first was the 1800 election, which revealed a serious flaw in the US Constitution. Thomas Jefferson and his running mate Aaron Burr each received 73 electoral votes.
The original wording of the Constitution didn’t distinguish between electoral votes for president and vice president, so the decision had to be made in the House of Representatives where each state had one vote.
The voting went on for several days, and in the first 35 ballots, Jefferson had the support of 8 states while Burr had 6. 9 states were needed to win and Jefferson obtained that on the 36th ballot. He would be the next president and Aaron Burr was declared vice president.
The dispute led to ratification of the 12th Amendment, which changed the way the electoral college functioned. The only time the amendment was used was 1824.
That year Andrew Jackson received a plurality, but not a majority, of electoral votes cast. Jackson received 99 electoral votes, John Quincy Adams 84, William H. Crawford 41 and Henry Clay 37.
All the candidates were members of the same party and each had fallen short of the 131 votes necessary to win. The election was again thrown to the House.
According to the 12th Amendment, the House had to choose the president out of the top 3 candidates. This meant Clay was eliminated and he endorsed Adams.
Crawford’s poor health following a stroke made his election unlikely. Because Adams later named Clay his Secretary of State, Jackson’s supporters claimed there was a “corrupt bargain.”
It came down to the vote of single representative from upstate New York, Stephen van Rensselaer III, the founder of Rensselaer Polytechnic Institute. Once again, each state was given one-vote, and Adams had the support of twelve states, one short of what was needed.
When Congressman van Rensselaer entered the Chamber that day, he was ushered into the office of Speaker Henry Clay, who along with Daniel Webster tried to persuade him to vote for Adams. They were unsuccessful, but the combination of the best persuaders in American history may have had an effect.
Before voting, van Rensselaer bowed his head in prayer. When he opened his eyes the first thing he saw on the floor was a slip of paper with Adams’ name on it. Accepting it is a sign from God, he put the slip into the ballot box. Adams carried New York by one vote, and it was the final state needed for his election.
The election of 1876 saw the highest voter turnout in U.S. history, a whopping 82 percent. The nation was enduring a severe depression. Because of the economy, Democrats won a 74 seat majority in the House during the 1874 off year election, but the GOP would reduced that to just 9 seats two years later.
Gov. Samuel Tilden (D-NY) won the popular vote, and Gov. Rutherford B. Hayes (R-OH) initially conceded.
Then the electoral votes in three states were disputed. A single electoral vote decided the outcome in Hayes’ favor. A Democratic-controlled Congress had admitted Colorado in time to participate in the presidential election, when without its votes, Tilden would have won.
The story is told in “By One Vote: The Disputed Presidential Election of 1876” by Michael Holt 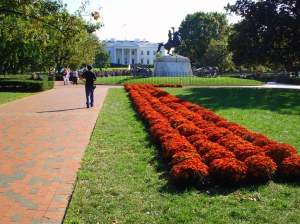 Lafayette Square is directly across Pennsylvania Avenue from the White House, and contains four statues honoring foreigners who had key roles in the American Revolution.

Many isolationists use quotes from George Washington and Thomas Jefferson to claim they represent the Founders’ viewpoint. This was also the tactic of the America First organization in its campaign to keep the nation neutral in World War II. At every large rally they displayed Washington’s portrait, and even though the Nazi’s controlled all of Europe, they claimed America would never be attacked by the “Axis of Steel.” They went out of business the day after Pearl Harbor. END_OF_DOCUMENT_TOKEN_TO_BE_REPLACED

On June 11th, 1776, five people were appointed to the committee which drafted the Declaration of Independence. Three of them are shown in this painting, Benjamin Franklin, John Adams and Thomas Jefferson. The resolution adopted on July 2, 1776 said: "Resolved, That these United Colonies are, and of right ought to be, free and independent States, that they are absolved from all allegiance to the British Crown, and that all political connection between them and the State of Great Britain is, and ought to be, totally dissolved."

On the afternoon of July 2, 1776 in Philadelphia’s State House, the Second Continental Congress voted unanimously to approve a “resolution of independence”. The nation would no longer be British North America, and the United Colonies were transformed into the United States of America. END_OF_DOCUMENT_TOKEN_TO_BE_REPLACED

The First Amendment to the U.S. Constitution says government shall make no establishment of religion. The actual words prohibit the making of any law “respecting an establishment of religion, or prohibiting the free exercise thereof.” That is not an ambiguous phrase. They did not want a state sponsored religion similar to Great Britain. Some of them fled Britain to avoid the Church of England. END_OF_DOCUMENT_TOKEN_TO_BE_REPLACED