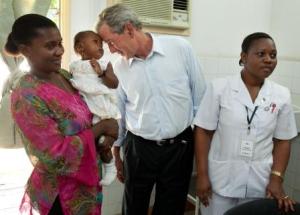 Over 70 million people have been infected with HIV-AIDS, but only one has been cured. Thanks in large part to the generosity of the United States, over 8 million people world wide are now on life saving antiretroviral therapy.
1.7 million people died of an AIDS related illness last year. The International AIDS Society Conference is in Washington this week for the first time in 22 years, and Laura Bush will be speaking to the gathering.
AIDS prevention is a major focus for rockstar Elton John. He says the president who did the most for AIDS victims was George W. Bush: “He was an amazingly informed about AIDS. I had so much respect for him, especially when the President’s Emergency Plan for AIDS Relief (PEPFAR) was announced when he gave $15 billion to AIDS.
“He knew what he was talking about. One of the old adages in life is never judge someone until you meet them. I didn’t like his policies but I have to say when I met him, I found him well informed and determined to do something about the AIDS situation so I changed my opinion of him. I learned a lesson.”
The Bush initiative was largest amount of funding by any nation to fight a single disease. The major issue facing prevention efforts today is not a lack of technology or funding, but the social stigma associated with HIV, which deters individuals from accessing both education and treatment programs.
Bush was well known for his Freedom Agenda and says “One aspect of freedom is for people to be free from disease.” He has made three trips to Africa since leaving office. 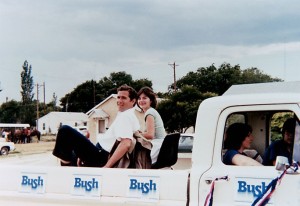 Many GOP candidates marched in parades today but hopefully they received a better welcome than what happened to George and Laura Bush on July 4, 1978 in Muleshoe, Texas. Bush was then 32 and running for Congress in a race he would lose.
In the GOP primary Bush received only 6 out of 230 votes in that county. In “Decisions Points,” he wrote:
“The way I saw it, I had plenty of room for improvement. Laura and I smiled and waved at the spectators from the back of our white pickup truck. Nobody cheered. Nobody even waved. People looked at us like we were aliens.
“By the end I was convinced the only supporter I had in Muleshoe was the one sitting next to me.”
Muleshoe is the home of “Ol Pete,” the National Mule Memorial. When Bush was elected President, the Texas Historical Commission had “Ol Pete” removed from his permanent home to travel to Washington, D.C. He was guest of honor at the Texas Inaugural Ball, and appeared on the Texas float in the Inaugural Parade. Few people then knew of Bush’s memory of Muleshoe.

“Iraqi democracy will succeed, and that success will send forth the news from Damascus to Tehran that freedom can be the future of every nation. The establishment of a free Iraq at the heart of the Middle East will be a watershed event in the global democratic revolution.” — President George W. Bush, National Endowment for Democracy, November 2003

Another round of parliamentary elections in Iraq is scheduled for Sunday, and the current prime minister, Nouri al-Maliki, could lose his bid for a second term. This is expected to be a smooth election and the result may well be a peaceful transfer of power to the opposition. It would be an unprecedented event in Iraq and the Arab world. It will also be more evidence of the positive transformations which have taken place.
The cover story in the current issue of Newsweek declares “Victory at Last.” The subtitle is “Rebirth of a Nation,” and the photo is of George W. Bush leaving the stage. The article describes the success of democracy in the seven years after the U.S. liberation, and how a stable Iraq is no longer a problem for the world.
The Iraq economy is more vibrant than anywhere else in the region. Its oil revenues were $39 billion in 2009, and this is expected to quadruple in a decade as pipeline repairs are made. Unlike the past, none of this money will used to fund terrorist groups or the construction of 54 palaces for a cruel dictator.
Newsweek has been an ultra-liberal publication for many years, but common sense is finally being heard on the left. Newsweek was a bitter foe of the Bush Administration, but now they say the elections are “a watershed event that could come to represent a whole new era in the history of the massively undemocratic Middle East. . . these politicians have come to see themselves as part of the same club, where hardball political debate has supplanted civil war and legislation is hammered out, however slowly and painfully, through compromises—not dictatorial decrees. . . What outsiders tend to miss as they focus on the old rivalries among Shiites, Sunnis, and Kurds is that sectarianism is giving way to other priorities.
“The turnaround has been dramatic. ‘The political process is very combative,’ says a senior U.S. adviser to the Iraqi government who is not authorized to speak on the record. ‘They fight—but they get sufficient support to pass legislation.’ But as shouting replaces shooting, the Parliament managed to pass 50 bills in the last year alone, while vetoing only three. The Iraqis have surprised even themselves with their passion for democratic processes.
“Sawsan Abdul Rahman, an English major at Mustansiriyah University, says in the past she felt obliged to cover her head. ‘I wear a miniskirt now,’ she says. The changes are more than superficial. The country not only has the freest press in the region, but the gutsiest. More than 800 newspapers and TV and radio stations have aggressively gone after politicians and sleazy businessmen.
“The country now has more than 1,200 trained judges, and courts have convicted senior officials on corruption charges, with more cases pending. Women’s groups, too, have asserted themselves, pushing for 25 percent of provincial councils to be female and forcing the Education Ministry to roll back a proposal to separate boys and girls in school.
“Perhaps the most encouraging sign is that Iraq’s military has become one of the most respected institutions in the country. The remnants of Al Qaeda in Iraq continue to carry out horrendous suicide operations, and have inspired near–universal revulsion among Iraqis.”
This transformation is possible because George Bush changed the world. Many of his predecessors were popular, but they did not respond to aggression with sufficient force, and their failure to use military power often emboldened our enemies.
If you do not believe me just ask Osama bin Laden. He spoke to TIME magazine about the October 3, 1993 botched raid in Somalia which resulted in the deaths of 18 U.S. soldiers. Four days later President Clinton pulled all American forces out of Somalia.
Bin Laden said this incident made him realize “more than before that the American soldier was a paper tiger and after a few blows ran in defeat.”
Other examples sited by bin Laden were the 1983 attack in Beirut, Lebanon when a 16 year old girl driving a bomb packed truck blew up the Marine barracks. The result was a total American withdrawal.
The terrorist also knew that the first Persian Gulf War ended after 100 hours, and Bill Clinton’s Kosovo bombing campaign resulted in no American casualties. The U.S. response was also muted after the African embassy bombings and the attack on the destroyer Cole.
There was nothing muted about the response of the Bush administration. Former Spanish Prime Minister José María Aznar says military and economic power makes America, “the Rome of our times, a target of so much criticism. This comes with the territory, and Americans are use to it.” We will continue to be a target but as Iraq and Afghanistan are demonstrating, the United States has come in peace and we are leaving without any material gain. We are the peacemakers and our mission is to benefit all mankind.

In April researchers at the Stanford University School of Medicine released an in-depth report on former President George W. Bush’s Emergency Plan for AIDS Relief. The report credits the former President with saving over 10 million African lives, but it has received almost no press attention. Bush spoke about AIDS on June 17th during his first post-presidential speech, but the media ignored his remarks.
One participant at the conference said “If a Democratic Party president had done this, he would be feted as both a national hero and international hero on his way to a ceremony with the Nobel Committee.” Rock star Bob Geldof asked Bush “Why doesn’t America know about this?” Bush answered: “I tried to tell them. But the press wasn’t interested.”
The Bush Administration did contribute to the deficit. The former President quadrupled foreign aid, he spent $15 billion on AIDS treatment and prevention, and $10 billion on his Millennium Challenge Account. This was not a handout but a partnership restricted to responsible nations. Amid poverty and disease this money has been an investment for growth. In many countries the aid is being replaced by trade pacts, business deals and home-grown income.
According to Paul Kengor the author of God and George W. Bush (HarperCollins, 2004), “Bush understood the financial cost — and said so explicitly. Nonetheless, he judged that only America could carry out this ‘act of compassion’ at that critical juncture. He also judged, apparently, that only he, as a Western leader, had the will to do this. Millions of lives have been spared or bettered due to President Bush’s intervention.”